Represent data as a set of nodes and edges between them.

Network analysis involves representing data as a graph (or network) and then analyzing that graph using standard analyses. A graph is a set of nodes (or verticies) and relationships between those nodes called edges. Edges between nodes can be directed (one way) or undirected (two way). Both nodes and edges may be weighted, e.g., to signify importance.

Here's an example of a simple graph with six nodes and  edges between some of them:

A more involved example of a graph is a social network of Twitter users wherein nodes are the users and edges between nodes are established based on whether a user replies to or mentions another user in a tweet: 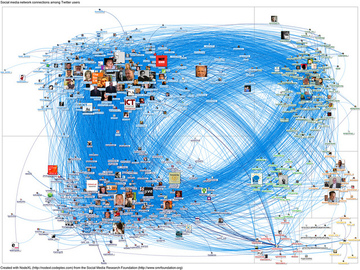 Once data is represented as a graph, a number of standard analyses can be applied. Popular graph analyses include:
A general overview of network terminology and the common metrics are provided in this video series by Prof. Phil Lombardo of Endicott College.

More details of these can be found on this Wolfram Alpha page.

This analysis does not have any attachments.

Resources that use this anlaysis